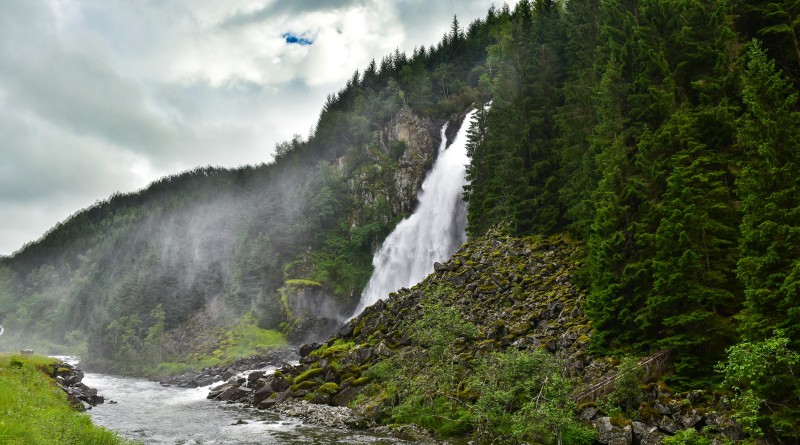 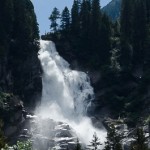 Because I usually have a two week holiday in May, in 2015 I wanted to go on a waterfall journey somewhere in Europe. I had three options: Norway, Slovenia/Italy or Austria. A few days before the start of my holiday, I watched the weather throughout Europe and Norway was the best option. Although the temperatures were not very high, May is normally one of the driest months. Later on I discovered that Springtime had been very cold and there wasn’t much melted snow and ice in the rivers feeding all those waterfalls in Norway.

From the Netherlands I drove to the north of Denmark where a ferry leaves to Langesund in Norway (very cheap), some 150 kilometer south of Oslo. A perfect start for my trip, I thought … The weather was perfect, sunny and approximately 11C.

The first waterfall I wanted to visit was the 100 meter high Rjukanfossen in Rjukan / Tinn. This was the first waterfall with no water in it. A little bit disappointed or better disillusioned and angry with myself I drove like crazy to Roldal not far from the famous Langfoss. I stayed the night here.

The next day I was awake very early (it is short time dark in Norway in May) and at 8.15 in the morning I arrived at the Langfoss, which was still in the shadow, but I had no hurry. It was still cold and after an hour waiting for the sunrise I took several pictures.

I drove back to road 13, on to the Låtefossen/Espelandsfoss, Vidfossen, Tjornadalsfoss and all those other amazing waterfalls along road 13. My main goal was to walk to four huge waterfalls (Tveitafossen, Nyastølfossen, Nykkjesøyfossen and the most beautiful one  Søtefossen) in the Husedalen near Kinsarvik. But again a big disappointment, there was no water in the otherwise mighty Tveitafossen. I did not made an effort look upstream because there simply was no water in the river.

I started to get the feeling that I would be disappointed more often. I decided to estimate which waterfall was worthwhile visiting and which waterfall I never visited. Fortunately the Ordalsfossen, Steindalsfossen and Fossen Bratte were quite a good choice and I was able to make beautiful pictures. Though I did have some trouble getting at the Ordalsfossen because of the amount of snow.

I had read that the waterfalls in the Geiranger Fjord were beautiful in May. A nice ride, but I had the time. I decided to stay at the campground down the Tvinnefossen, which otherwise was quite powerful, but definitely not at its best in May.

From now on everything would go differently than I had imagined. Several roads were closed and because my Norwegian was not too good, I was confronted with a closed road at roadblock. Maybe I should had prepared myself better for this journey! This happened twice to me and after visiting the Buldrefossen, buried under the snow, I decided to drive back to the Netherlands. Do not get me wrong, I also visited several waterfalls that were worthwhile (Stalheimsfossen / Sivlefossen, Kjelsfossen, Rjoandefossen, Turlifossen, Stodnafossen), but I think I got a little homesick to. Travelling alone has its advantage, but when getting disappointed several time there is nobody saying “what the heck, there are still so many beautiful things in Norway, just enjoy”.

After 3 days of traveling through the south of Norway, where I drove more than 1.500 kilometer in Norway and again 1.600 kilometer to arrive in Norway, it was a damn expensive 3 days in Norway but looking back quite nice.

For all other countries, please check the menu