The Swedish word for waterfall is “vattenfall”, but at names of a waterfall you always see “fallet” added or “Forsen” which means rapid.

For waterfalls you need in general mountains, preferably high mountain. Sweden consist out of 13 mountains above 2.000 meter, all in the region of Norrbotten County in northern Sweden. Surprisingly the most beautiful waterfalls can be found in the south/middle of Sweden on the border with Norway in the Jämtland and Dalarna region.

Biggest waterfalls by volume in Sweden 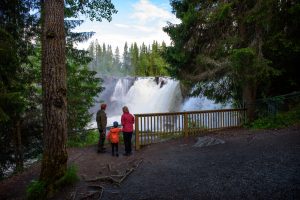 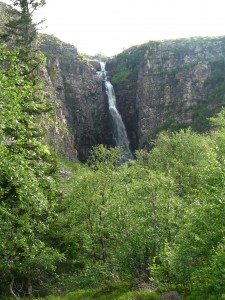 Most beautiful waterfalls in Sweden 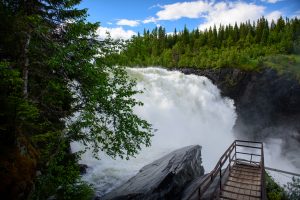 I think Njupeskär (Njupeskärsfallet) is by far the most beautiful waterfall in Sweden and is one of the most visited waterfalls in Sweden. There are several hiking trails that lead to different viewpoints on the Njupeskär waterfall, from the base of the waterfall or from a higher viewpoint.

In 2017 I visited Sweden and I enjoyed my visit to the Handölsforsen, a very powerful and gorgeous waterfall with a height of 40 meter. A little further towards Åre, the Tannforsen is maybe even more beautiful. Also very powerful and overwhelming, although it is only 38 meter high.
Nevertheless, I would like to mention another very beautiful waterfall in Sweden, Hällingsåfallet. Hällingsåfallet is a gorgeous waterfall with the most beautiful rainbow of Sweden, at least when the sun shines.