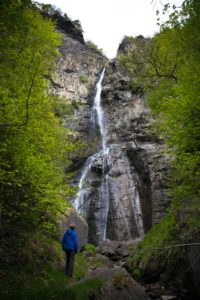 Ik had some problems with my gps to find the parking but if you know where t go it si very easy. When driving on highway A22 between Bolzano and Brixen take the exit Val Gardena and follow the signs for Brixen and Brenner onto road SS12. After 3,8 km take a left turn on a narrow road (no signs but at gps 46.670145, 11.615484). Stay left and drive into the hamlet of San Pietro Mezzomonte. Parking is a little bit a problem but I managed to park the car at a beautiful Italian designed house with view on a vineyard.

From the parking in Schrambach/San Pietro Mezzomonte it is a 5 minute walk to the base of the Schrambacher wasserfall (Cascata di San Pietro Mezzomonte). The walk is short but very special and pleasant in a gorgeous scenery. You walk by old and abandoned houses, several benches where you can rest and all kind of plants and trees. 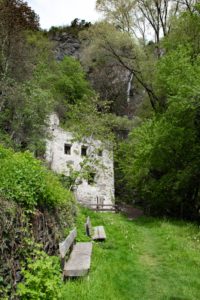 The Schrambacher wasserfall is a quite unknown waterfall but is a waterfall that belong to the most picturesque waterfall of Italy.

At an altitude of 650 meter the river Schrambach drops down 63 meters in a single drop with a fan shape bottom. Normally the Schrambacher wasserfall is a twinfall with two separate drops joining each other at the bottom.

I visited the Schrambacher wasserfall end of April 2019 and I think that is a little to early in the season. From the pictures I saw I guess that after a rainy period the twinfall shows up and that might be a good moment. In summertime the waterfall can dry out. If there is water in the waterfall and it is warm weather then a refreshing shower belongs to the possibilities.