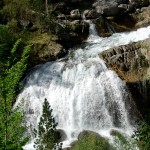 The hike into “Parque Nacional De Ordesa Y Monte Perdido” starts at Torla (in summertime). Here you have to buy tickets for the bus that runs to the park entrance (10-15 minutes). It is wise to buy the tickets in advance. There is a small wooden selling point next to the visitors center on the parking lot. 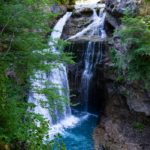