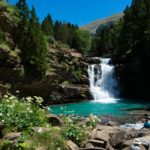 Cascada Gradas de Soaso is a gorgeous waterfall in “Parque Nacional De Ordesa Y Monte Perdido” in the region Aragon-Huesca, Spain. The national park of Ordesa is heaven for people who love chasing waterfalls. There are so many beautiful waterfalls that I didn’t visited them all (yet). 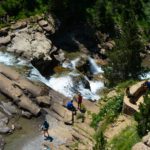 The view on cascada gradas de Soaso is amazing: the colors of the water, the big mountains in the background, green of the trees and a blue sky. The ideal circumstances for nice pictures.

The first view on cascada gradas de Soaso is at the river with the waterfall in the distance. Walk a little closer to the perfect place for a picnic. Because it was quit busy we walked a little further along the river shore where we lunched. This was also a nice spot for taking pictures.

On the way to cascada gradas de Soaso you already past two big waterfalls:
Cascada de Arripas is the first waterfall in the river Rio Arazas when walking from the park entrance near Torla to the end of the valley (cascada de la Cola de Caballo). The hike is easy and you walk through woodland. After 40 minutes we arrived at the viewpoint on Cascada de Arripas on an altitude of 1.400 meter. The view is very nice and you can enjoy the power of the waterfall from the path that lies above the waterfall.

We reached the last waterfall, cascada de la Cola de Caballo after 3,5-4 hours. A very beautiful waterfall in the shape of a horsetail with a height of 100 meter. Especially when people are standing in front of the waterfall you will realize how big it really is.

Best time to visit Cascada gradas de Soaso (Ordesa) is early summer when there is a lot of snow melting down the mountains. You can see the difference between the first pictures (taken early summer) and the last pictures (taken end of July). Out of the main season it is also allowed to drive your car to the park entrance, to the parking over there.