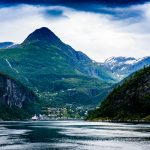 When you arrive by boat in Geiranger you will notice a tall waterfall coming down from the mountain site at the left of Geiranger, Grinddalsfossen. The waterfall starts at an altitude of 660 meter with falling down into the valley.

From the boat you can see Grinddalsfossen from a distance but there is also a waterfall walk starting from the camp site in Geiranger center where you can walk up along a waterfall (Fossevandring) called Storfossen. A rusted staircase (nice design) leads up along Storfossen, the name of the lower part of Grinddalsfossen. Maybe this part don’t belong to Grinddalsfossen anymore. Near hotel Union and the visitors centre you have a clear view on the long stretched Grinddalsfossen. 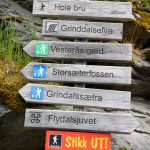 Driving up the road to Hole hytter centre you will see the lower part of Grinddalsfossen falling down. You  can’t walk up along the waterfall to check out the rest from nearby…but a walk to Grinddalssaetra is possible (see picture at the bottom of article).

Grinddalsfossen is an unofficial name of the waterfall but to my opinion it should be an official named waterfall. Flow of the river Grinddalselva is significant and flows probably most time of the year.