I just recently discovered this amazing waterfall, Grongstadfossen (or Grungstadfossen on maps), west of Høylandet in the region Nord-Trøndelag, Norway. So August 2018 (when I was visiting the north of Norway) I was anxious to meet this immense waterfall. 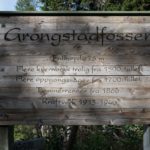 From the E6 it is only 16 kilometer to the parking of Grongstadfossen. From the E6 take the exit to Høylandet (Fv775). At the end of the road turn left to Sentrum. Soon you already see a sign for Grongstadfossen. Follow the small small road for appr 1,3 km. The small road leads to a car park (gps 64.628179, 12.267305). From here you have to walk down the path for 100 meter until you reach the viewpoint on Grongstadfossen.

I was a little disappointed to see that there was hardly any water in the river. You only can see Grongstadfossen from a distance. I tried to find a path down but there was no official path down. I had seen pictures of a Grongstadfossen which was more powerful. I think late spring the volume is much higher or after heavy rainfall. The river Nordåa is being fed with water from several lakes (Olsgrønningen, Storgrønningen).

I have also seen pictures from the other side of the river but on maps there isn’t an official trail going down to the waterfall. I still like the shape of the waterfall but the limited possibilities to have a good view takes away a lot of fun.

In 2013 there where plans for building a power plant but luckily they turned down the request.

There aren’t many waterfalls in this part of Norway but nearby you can find another waterfall I did like,  Skrøyvstadfossen. This waterfall is located between Høylandet and Salsbruket along road Fv776. It is a 25 kilometer drive but worthwhile to visit.
Along road E6, not far from the exit to Grongstadfossen there is also a very powerful waterfall called Formofossen.