Gudbrandsjuvet is the name of a small, but scenic gorge in the Valldalen near the Hamlet Alstad (Norddal) in the region More og Romsdal, Norway.

Most people take road 63 to get to the famous Trollstigen. Not far from Valldalen you cross the river Valldøla. Here there are two parkings. In summertime it can get very crowded with busses and many tourists. 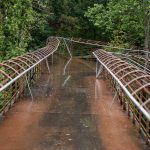 The thing I noticed first was the walkway along Gudbrandsjuvet. A nicely designed iron walkway, a real architectonic masterpiece. Although I am an upholder leaving nature like it is, the iron walkway adds something special.

The waterfall at Gudbrandsjuvet isn’t big but is a nice, powerful and scenic waterfall in a small gorge at the river Valldøla. Gudbrandsjuvet is a 5 meter narrow and 23 meter high gorge through which the Valldøla River forces itself.

Valldalen is one of the more wet area’s of Norway with a lot of rainfall. The waterfalls in the river Valldøla are quit powerful with an average volume of 16.8 m³/s. Valldøla runs from Romsdalen (Langvatnet) to Tafjorden and is appr 50 km long. 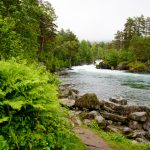 Walking back to the car you see another small waterfall, a hundred meter upstream in the river. The colors of the river are beautiful. The path to the river, to see the waterfall better, was quit sloughy. But at the river you have a good view on the waterfall with the Valldalen in the background. 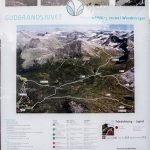 There are several hiking trails in the area of Gudbrandsjuvet and there is even a big information board at the parking. The levels of the walks are marked with colors (picture left). More information about things to do can be found on the website of Valldalen (Norwegian).

According to a story from the 1500’s, the ravine was named after a man called Gudbrand, who ran off with his new bride and saved himself from his angry pursuers by jumping over the ravine at its narrowest point. Gudbrand was declared an outlaw for his deeds, and lived the rest of his life in a stone hut in one of the side-valleys above Gudbrandsjuvet. The valley is still called Gudbrandsdalen to this day. One thing the story doesn’t mention is whether his bride followed him over the ravine. 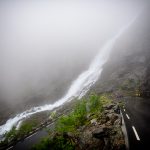 After visiting Gudbrandsjuvet you have to drive further onto Trollstigen, a gorgeous road. Not only Trollstigen itself but also the road that leads to Trollstigen. Last time I was there, July 2017, the weather was terrible and clouds were covering the upper part of Trollstigen. I was quit disappointed because I was there to take pictures. Driving down I had (fortunately) a better look at the big Stigfossen and Trollfossen.

I also recommend visiting one of the most beautiful waterfalls in Norway, Muldalsfossen. A 45 minute walk with 13 hairpin curves leads to the top of Muldalsfossen and another 15 minuten (at the other side of the waterfall) going down to gorgeous viewpoint on the 200 meter high waterfall.