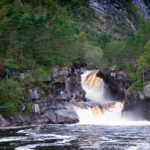 Rafossen is situated near main road 465. Driving on road 465 there is a little wooden sign with Rafossen  in the hamlet of Rafoss. Take the turn and drive up the narrow road for two kilometers until the road stops.  From here it is a short walk. When I was here August 2019 they were working on the road. There is also (an even easier) way to approach Rafossen. A little south of Rafoss there is a bridge crossing the river Kvina. Go right to Lyding and follow the road to the end and park the car where possible. After 2-3 minutes you reach the shore of the river with a new wooden platform/viewpoint.

Advantage of this viewpoint is that you also can see the upper drops. Disadvantage is that the distance to the waterfall a little over a hundred meter is.

Note: in the summer of 2021 there are building activities for a a powerplant at the waterfall. Probably there isn’t much to enjoy and you can’t see Rafossen in all of its glory.

Rjukanfossen drops down over three stages with a total height of 42 meter. The Rafossen is a regulated waterfall but I have seen enough beautiful pictures to be sure the water flows frequently with a great power.

Rafossen was mentioned for the first time in 1292, but there are found remains of settlements from dating back to roman times and even as long as 10000 years ago.

Rafossen creates a natural barrier for salmon traveling up the river. There are plans of building a power plant in the mountains transferring a large part of the flow away from the waterfall and create the possibility for salmon to travel further upstream.

In 1439 the name was written as «de Radefoss». The first word «rad» means step or row, meaning a line of waterfalls. Before the water in
the river was regulated for hyropower the roar of the waterfall could be heard several miles away. It was said it could be heard all the way to Kristiansand, «efter folkesagnet kunde dens mektige brusen høres paa Groheien ved Christianssand».

A priest from Audnedal (east for Kvinesdal) Peder Claussen Friis mentioned Rafossen in two of his books. He writes that the water shoots through the waterfall like shot from a pipe or gutter, so they sometimes had to lie between rocks and sharp beams with a barge to be able to catch fish. When the salmons jumped up the waterfall they could fall down in the barge.

There is a legend of killer trying to escape his pursuers and jumped over the waterfall that was 12 alner wide (7,52 meter!), and came to the other side unharmed. The pursuers tried to jump too, but fell in the waterfall.