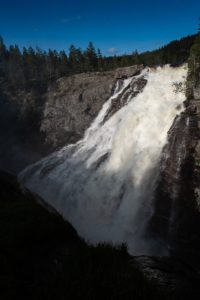 Rjukanfossen is located at the end of the Tovdal, north of the hamlet Dale. From Dolemo, first take road 413 to the west, but after a short while take the exit into the Tovdalen (Fv272). Follow road Fv272 for 26 kilometer until the road ends at Dale.

Park the car here, there are signs  Rjukanfossen. Cross the river Dalsåna until you reach the west bank of the river. There is already a big waterfall visible in the distance but this is the Kleivebekken. Follow the river upstream. The path already starts ascending in the beginning but further it flattens a bit. The trail is very well signed with blue dots but you have to look where you are walking. The surface consist of stones, many tree roots and sometimes slippery rock formations.

From the bridge it is a pleasant walk following the river for 3,1 kilometers (60 minutes) into the Årdalen Nature Reserve. After the first view on Rjukanfossen (at the information board) the trail is shortly demanding (be very careful here!!).

Your effort will be rewarded with a spray of mist and a gorgeous view on an extremely powerful waterfall. At least when I was there August 2019. I don’t know if it was because of the rainfall in the days before but the amount of water coming down was enormous.

Rjukanfossen is still unspoiled by water regulation and has a free fall of 45 meter. Rjukanfossen is situated in  a beautiful sight in the woods of Tovdal.  With a total height of 45 meter it is one of the tallest waterfalls in the region of Aust-Agder. The source of the watercourse Kinnåna/Tovdalsåna lies up in the mountains where hundreds of lakes feed Rjukanfossen.

There are many other waterfalls named Rjukanfossen. The best known one is the Rjukandefoss in the Hemsedal. There used to be a very big (regulated) Rjukandefossen near Rjukan but this one is only flowing two or three times a year after a period of to many rainfall.