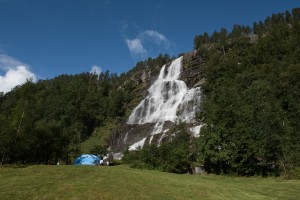 Tvindefossen, also called Tvinnefossen, is a popular waterfall 12 kilometer north of Voss in the region Hordaland.

Tvindefossen can be found along road 16, north of Voss near a small hamlet called Tvinno or Gjøstein. In summertime the waterfall is popular by foreign tourists. Bus loads of people stop at the parking lot, for a photo or a souvenir at the shop.

The water of the river Kroelvi jumps over a cliff and drops down 109 meters. Some sources mention a height of 149 meters, but I have measured the height with a laser height meter. If you count in the last part of Tvindefossen, where the river cascades a little bit, the total height should be 116 meters.

If driving near Tvindefossen and need a place to stay overnight, the camping site at Tvindefossen is awesome. Dining with a view on such a marvelous waterfall, that is really unique. The camp site is directly situated at the waterfall and a walk to the fall is easy and can be recommended. For children there are rocks to climb on and small streams to jump over.

There are several viewpoint from where you can take pictures: at the roadside from a distance, just in front of Tvindefossen or from the camping site a little bit from aside. You mostly will photograph directly towards the west. Best time to visit Tvindefossen is early in the morning when the sun rises above the mountains and the first light rays of the sun reaches the waterfall.

I visited Tvindefossen 4 times. The first pictures are taken in June-July, the best time for visiting Tvindefossen is when temperatures are rising and melted snow feeds Tvindefossen. The last pictures where taken May 4th 2015, but that is to early in the season. You clearly can see the difference in volume of Tvinnefossen.

One thing many people won’t do is to walk to the top of Tvindefossen. From the camping site walk along the road to the north on a small road that runs parallel to the main road. After 300-400 meters there is a road that goes up to the top of the waterfall.

Here you have an awesome view over the valley. But…you can walk on along the river until you reach a second beautiful waterfall called Trollfossen. A nice Picturesque waterfall that deserves some credit.