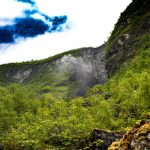 Coming close to Vettisfossen you already see a plume of mist rising from the base of the waterfall. This makes photographing a little bit more difficult, but there are viewpoints where the mist of water doesn’t bother you.

Vettisfossen is fed by melted ice and snow from the glacier at the Stølsnostinden (Stølsnosbreen) and the glacier Koldedalsbreen. The river Morkaelvi, that feeds Vettisfossen, ends in the river Utla after a sheer drop of 275 meter.

Vettisfossen is located in the Utladalen near Øvre Ardal in the region Sogn og Fjordane, Norway. From Øvre Ardal, the Utladalen is easy to access over road Fv301. In the center of Øvre Ardal just follow the signs for Utladalen. At the end of the road there is a big parking and the first big waterfall is already visible: Hjellefossen. From the parking you already have a fantastic view on Hjellefossen. I forgot to measure the height of the waterfall, but the visible height is at least more then 200 meter. The total height of Hjellefossen is 365 meter, one of the bigger waterfalls in Sogn og Fjordane. 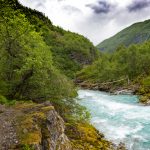 The Utladalen is very popular for hiking and is one of the nicest valleys to visit. The hike to the Vettisfossen is fairly difficult passing several great waterfalls with Vettisfossen as the highlight (and end) of the walk.

After admiring the powerful Hjellefossen near the parking the trail along the river Utla goes slightly up. After 20-25 minutes you reach the second big waterfall on the left hand side, Avdalsfossen. The water of the Slufsedøla en de Gravdøla drops down in a single drop over 175 meter and is fed by melted snow from the mountain range Hurrungane.

A little bit upstream (25 minutes) on the river Utla there is also a nice, small scenic waterfall called Høljafossen with emerald green colors. I missed this waterfall years ago, but July 2017 I got a good view on Høljafossen. Although Høljafossen isn’t very big, I like this waterfall very much. 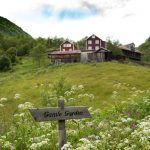 Further on, from the farm Vetti Gard, the trail gets tougher. Note that you have to walk towards the farm before you see a sign Vettisfossen (bottom). If you follow the sign Vettifossen (top) you go right to the top of the waterfall. I choose to stay down following the river Utla.

The trail goes up (sometimes steep) and you have to pay attention where to walk. Please go on, you will rewarded with a view on an enormous waterfall, Vettisfossen. With a single drop of 273 meters and with a lot of power Vettisfossen is truly voted as the most beautiful waterfall in Norway. Vettisfossen is named after Vetti Gard. Vetti is a farm with a long history that goes back to the 12th century. The meaning of the name Vetti supposedly means something along the lines of “fairy tale meadow”. Nowadays you can spend the night at Vetti Gard. More information about Vetti Gard can be found here.

At the top of Vettisfossen there is another farm with an almost similar name Vettismorki. I think this is an abandoned farm only used as a stop while hiking.

The hike to the base of Vettisfossen takes approximately 2,5 hour. The roundtrip time took me 5 hour, including (a lot of time) taking pictures of all those waterfalls. More detailed information you will find below.

There are several ways to get a good view on Vettisfossen. The first and easiest one is from the bottom as describes above.

It is also possible to walk to the top of Vettisfossen. From Vetti Gard, there is a sign pointing to Vettimorki/Vettisfossen top (1 hour). The trail goes steeply up with an elevation of appr 350 meter. 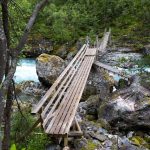 Another option is to follow the signs  Stølsmaradalen at the suspension bridge between Vetti Gard and the bottom of Vettisfossen. The trail is heavy and steep with an elevation of appr. 650 meter!!!!

Here you have an amazing view from the other side of the valley on an altitude of 860 meter. Here you also find another waterfall Stølsmaradalsfossen. It should be over 300 meters high but I can’t find many photo’s to be sure how it looks like.

Best time to visit all Utladalen waterfalls is hard to say because they fall down from both sides of the valley. I would say, start the tour somewhere around 10 or 11 a.m, late spring or early summer. Then you have enough time for the hike and on the way back you can see Hjellefossen in the sunlight without backlight. 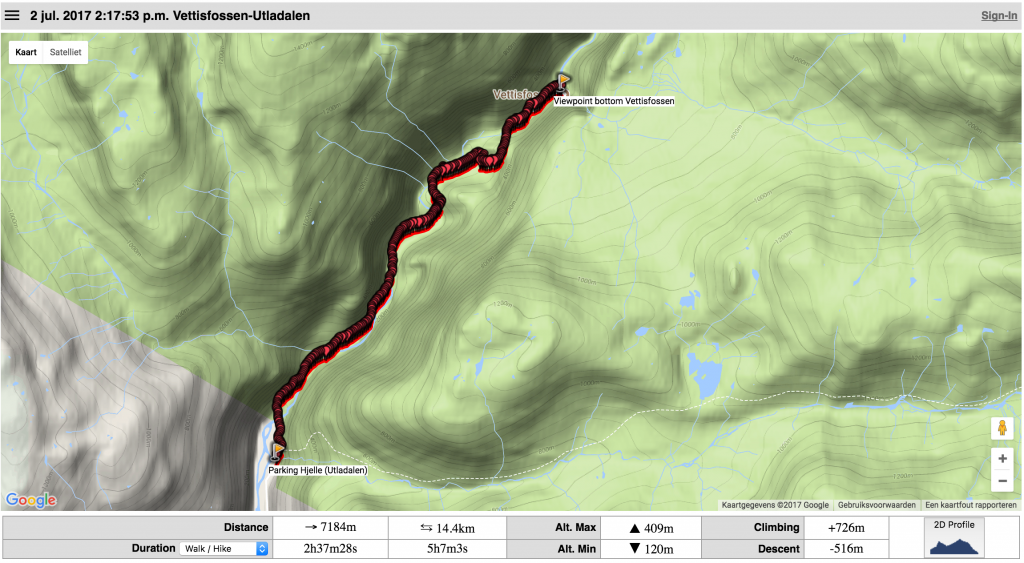