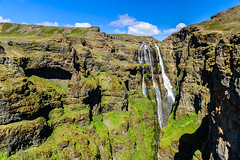 The name derives from a legend. A man violated the trust of a woman which belonged to the Huldufólk («hidden people») because he didn’t want to baptize their child. She was furious and turned him into a terrible whale, Rauðahofði. This whale killed many fishermen, including two brothers, whose blind father was a priest with magical powers. He placed the whale under a spell so he was forced to swim into the Hvalfjörður up on  the river to Glymur.  Under very much roar and protest (that is why the waterfall is called Glymur) the whale swum further and ended in Hvalvatn. It is said that whale bones are found in the lake.