The Gollinger wasserfall (sometimes named Gollingfall or Schwarzbachfall) is one of the most gorgeous waterfalls in Austria, located at Golling an der Salzach in the region Salzburg.

From highway A10 take exit 28 Golling. At the end of the road go left to Golling. A little further, at a crossing, you see a sign for “Bluntautal wasserfall”. Follow this signs now. Just for the “railstation” you have to go left again. When crossing the bridge go straight ahead (don’t follow the sign Bluntatutal). Now follow the signs «Gollinger wasserfall». The signs leads to a parking (gps 47.601791, 13.140430) almost in front of the Gollinger wasserfall. You can drive to the end of the road to P1. Parking is free.

At the parking there is an entrance where you have to pay admission (€5 for an adult and €3 for small children). 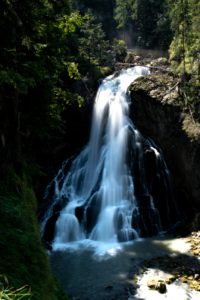 From the entrance it is a 3 minute walk until you see the majestic lower drop of the Gollinger wasserfall. Most popular is a taking pictures right in front of the waterfall, so it can get crowded over there. But I agree, it is a beautiful spot.

Take the path up along the Gollinger wasserfall and after 2 minutes another (maybe even better) viewpoint shows up. Take your time to enjoy this gorgeous waterfall.

Walk further up because the best is yet to come, the upper Gollinger wasserfall. After 8-10 minutes you reach the lower viewpoint on the upper waterfall. You only can see the last part falling in a sort of cave (but it isn’t). The view is unique and intrigued me. A perfect spot for an unique picture.

Cross the bridge and go further up to the Hexenkesselsteg (Witches Caldron Bridge) in 5-8 minutes. Here you see the Gollinger wasserfall plunging down in a hole (the sort of cave). Wow, what a view, what a power. Be careful with kids because it is a long way down! 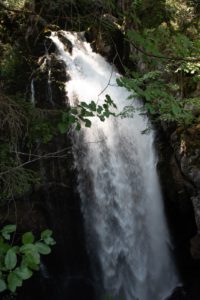 Finally it is a 2 minute walk to the source (quelle) of the Gollinger wasserfall.

July 2020 I visited the Gollinger wasserfall again and it was even more impressive. A lot had changed: the path, paying admission. It was funny that my memory was totally different from how it looks like now.

The Gollingfall (Gollinger wasserfall) is being fed by water from a quelle (natural source/cave) named Schwarzbachfall Höhle right above the waterfall. The cave entrance is 5 meters wide, but only 1 meter high, but very deep. The average amount of water flowing out of the cave is 1.261 l/sec, measured between 1999-2011.

The direct area of the waterfall is since 1985  a natural monument.