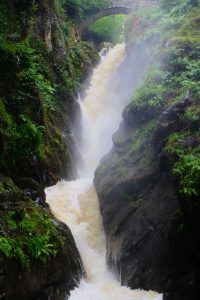 Aira force is a 21 meter high waterfall at Ullswater in the region Cumbria/England (United Kingdom).

Access to the waterfall is free but you have to pay for the parking. At the parking there is a tearoom, an information kiosk and a shop which sells snacks and gifts. Aira force can be reached in a few minutes.

If you like walking you can follow the Gowbarrow trail, a roundtrip walk that starts at the parking, runs along Aira Force and runs further around Gowbarrow park. The walk is 7 kilometer long, 2-3 hours incl. a stop  enjoying the power of Aira Force waterfall. A nice description can be found on the website of nationaltrust.

Aira Force is gorgeous waterfall: the river Aira beck drops down over 21 meter at an ancient stone bridge. The river name Aira is derived from Old Norse eyrr that means gravel bank. The Old Norse word fors means waterfall and is still used for waterfall names in the north of Norway and at the border with Sweden. In northern English dialects fors is nowadays written as ‘Force’. Aira force means: waterfall at the gravel bank.

One thought on “Aira force”