Brurasloret (Brurasløret) is one of the many waterfalls in the Romsdalen (Rauma) near Flatmark, 27 km south of Åndalsnes in the region More og Romsdal. 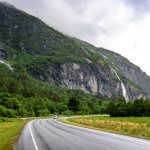 Often the middle part of Brurasloret is covered with clouds, also when I was in the Romsdalen July 2017. The first time, years ago in May, I was more lucky and I could see the middle part (see picture).

Height is more difficult to determine. Between the three drops of Brurasloret a big part is sliding down. The total descent of the waterfall is appr. 700 meter. Brurasløret is being fed by water from the river Styggefonngrova which tumbles down from the Fossafjelet (1.783 m), a plateau with lakes and small glaciers. 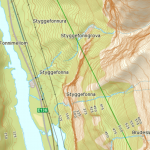