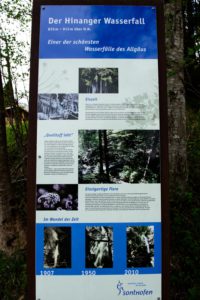 From Sonthofen take the road to Altstadten and to Hinang. The road runs paralel to road 19 to Oberstdorf. There are no signs for the Hinanger wasserfall but take the exit to Hinang centre. I used my gps because there aren’t any signs pointing to the Hinanger wasserfall. Once you have arrived at the trailhead there are several parking spots along the road. Once you know where the trailhead is, it is easy to find the waterfall.

The path is signed although it is very clear where to go to. The walk is very scenic and the path goes slightly up but is easy to do. Soon, after 10-15 min, you see the river Hinanger bach cascading down with in the background the big drop. 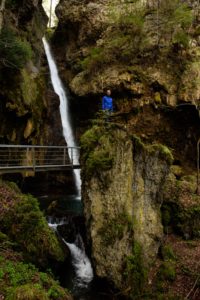 When standing on the bridge in front of the Hinanger wasserfall you realize how beautiful this waterfall it is. It is not only the water that thunders down but it also the moss that covers the surrounding, the bizarre shapes of the rocks and the water that drips down everywhere.
I am sure the pictures doesn’t represent the real beauty of the waterfall. You have to visit the waterfall yourself before you know what I mean.