From Kendall take the M6 to the south and soon take the exit to Kirkby Lonsdale (road A65) and further to Ingleton. There is a big parking at the trailhead of the Ingleton waterfall trail. There is a big sign (pointing left) when approaching Ingleton. Just follow the sign to the parking (gps 54.156925, -2.470823).

You have to pay admission for the trail, £7.00 for an adult. The trail is open all year around during daytime. More information can be found on the official website. Parking is for free. 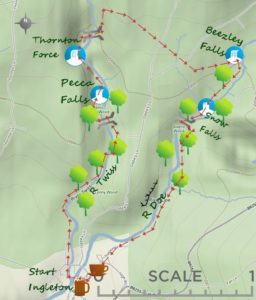 First you walk along the river Twiss with 3 major waterfalls: Pecca falls, Hollybush Spout and Thornton force. After Thornton force you cross to the river Doe where you will find: Beezley falls, Triple Spout, Rival falls, Baxenghyll Gorge and Snow falls.

The most impressive waterfall is Thornton force where the river Twiss thunders down from a cliff of limestone over 14 meters.The trail is 8 kilometers long and will take about 2-2,5 hours.

Ingleton is a small village, east of Lancaster on the edge of the Yorkshire Dales and a visit might be nice.