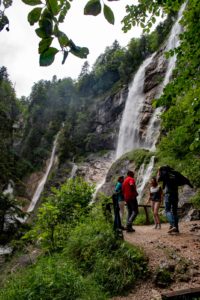 The Lauterbach wasserfall is an astonishing beautiful waterfall in the Echerntal, near Hallstatt in the region Oberösterreich, Austria.

The Lauterbach wasserfall can be reached by foot, from the centre of Hallstatt, in about 1-1,5 hour.  It is also possible to drive to the parking at the beginning of the Echerntal (gps (47.549613, 13.631023). In summertime somebody is standing at the main to road to prevent cars to drive in the town, but just say that you are going to the Lauterbach wasserfall and he will let you through.

Continue following the trail to a cave (Eulenloch). A little further go right (before the bridge) where the path runs (a little steep) up to the end of the valley where three waterfalls meet each other, among which the Waldbachstrub wasserfall and Lauterbach wasserfall. From the parking you can reach the viewpoint in 30 minutes.

A little down there is also a lower viewpoint on the Lauterbach wasserfall and the other waterfalls you shouldn’t miss. 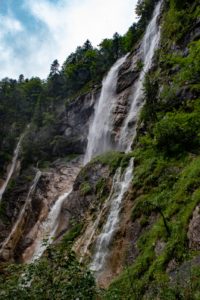 The Lauterbach wasserfall is the highest with a single drop of 85 meter. The height of the Waldbachstrub wasserfall was more difficult to measure because you couldn’t see all of the waterfall. The lower part, which drops down with great force, has an almost single drop of 20 meter. The total height (if you measure from the bridge you see above the waterfall) is approximately 90 meter.

The Waldbachstrub wasserfall was definitely the most powerful waterfall. A mass of water plunges over the edge of a 90m high gorge and rushes roaringly and thunderously over three levels into the depths. I don’t know if the waterfall is always that powerful? The night before it rained a lot and it hard to imagine how much water was thundering down. This is difficult to see on the picture and even on the video but it was unbelievable…

Best time to visit the Lauterbach wasserfall is probably from late spring until the late summer. Especially after a period of rain.

In Hallstatt itself there is another waterfall coming down but this one is nice but certainly can’t be compared with the beautiful Waldbachstrub wasserfall and Lauterbach wasserfall.