Dei Sju Systrene is the most famous and most photographed waterfall in the Geirangerfjorden situated in the region More og Romsdal, Norway. 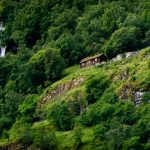 A nice thing about the waterfall Dei Sju Systrene (Seven Sisters) is that is has many stories and that it is located next to an old farm that used to be one of the richest farms in the area. Actually it were two farms that has been inhabited since the 17th century. The first written evidence of the existence of the farm dates from 1603. The farm Knivsflå has always been a productive and reach farm with plenty of food. At the most successful period there were 18 cows and a hundred goats. But the farm also has its  tragedies. Several people fell of the steep cliffs and died. If you look closer to the picture left you see the farm, with on the left the top of Dei Sju Systrene and look especially at the steep meadows. Nowadays the farm Knivsflå is abandoned because a dangerous hanging rock above Knivsflå could break loose. But it is still there.

West of the farm the river Knivsflåelvane drops down over a high perpendicular cliff and plunges down over 300 meter into the Geirangerfjorden. The biggest single drop is approximately 250 meter. The name Dei Sju Systrene (in English Seven Sisters) is derived from the seven separate streams that join at the top of the waterfall. You can’t always see the seven streams clearly, but with a little imagination…. 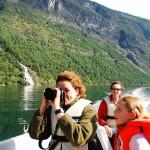 There are many viewpoints where you can go to having the perfect view on Dei Sju Systrene. One of my favorite is by renting your own boat at Grande camping. If you are with three persons it it even cheaper then taking the ferry. Year ago we rented a small boat (4 persons) for two hours and we explored the Geiarangerfjorden accompanied by two small wales/porpoises. Wow what an experience. Nice thing about your own boat is that you can decide which viewpoint is best.

Another option is taking the ferry Geiranger-Hellesylt, but this isn’t very cheap (360 NOK roundtrip). The ferry goes frequently and can be crowded. If you want a good spot (with a chair) on the deck, go standing in front of the line and take a chair on the right side (when leaving from Geiranger). Best views are from at the right side of the fjord. A ferry timetable can be found on the website of visitflam. 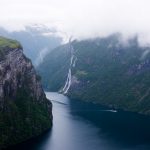 Another option is to drive up to Eidsdal on a road called Ørneveien (which means Eagle road). There is a parking at the top with the best view you can wish on the Geirangerfjord. With good weather you can make the best pictures of Norway with the famous Seven sisters (Dei Sju Systrene) at the right side. 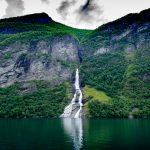 Another story: The waterfall Die Sju Systrene is a man made waterfall. Knivsfossane, the falls at Knivsflå had 6 rivers and the hotel owner of Union Geiranger paid a farmer to throw stones in one of the rivers to split the river. Then he had seven falls, now known as Dei Sju Systrene or Seven Sisters waterfall.