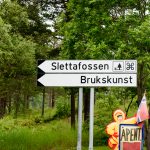 Driving on road E136, south of Verma, you will see a parking at the right side of the road at the sign «Slettafossen». From the parking you can walk to a tourist shop and picnic area crossing a suspension bridge. On the bridge you have a good view on Slettafossen. 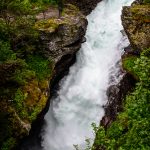