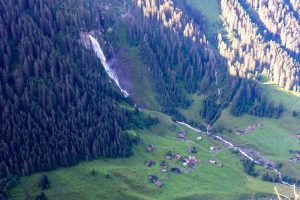 Stäubifall is one of the bigger, more powerful waterfalls in Switzerland, especially early in the season. Stäubifall is located along road 17 (between highway 2 and 3). From Altdorf drive to Unterschächen and further to the Klausenpass.

Near Aesch you already see the Stäubifall in the distance, from the roadside. There are several viewpoints along the road where you have tremendous views (from a distance) on the 100 meter single drop waterfall, Stäubifall. One of the best views is from an observation deck with a small parking (gps 46.871317, 8.821502). Early in the morning you are looking directly into the sun, so it is  better to visit the Stäubifall later in the afternoon.

It is probably possible to take a small road, at Unterschächen, to the luftseilbahn Äsch – Oberalp. There is a small parking for your car (gps 46.865182, 8.814590) where you are almost standing in front of  the Stäubifall. Unfortunately I had some big problems with my gps system during my visit to Switzerland that I totally forgot to find out if this is really possible.

Early in the season the waterfall can get very powerful, so impressive to see. A must see when you are driving in the Uri kanton. Driving over the Klausenpass is certainly a great experience!
The Stäubifall is mostly fed with melted snow and ice from the glacier Hüfi (Hüfifirn), a 7 kilometer long glacier (at least….in 2005) .

There is another waterfall east of the Klausenpass called Berglistüber wasserfall. A waterfall where you can walk behind and is mentioned as one of the most beautiful waterfalls in Switzerland