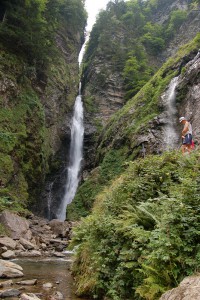 Cascade d’Enfer is a superb waterfall and one of the most visited ones in the French Pyrenees. Cascade d’Enfer is located in Vallee du Lys, south of Bagneres de Luchon in the region Midi Pyrenees/Haute Garonne, France.

From Bagneres de Luchon drive south in the direction of Spain but shortly after take the exit to Superbagnères (D125>D46). On the D46 follow the signs Valle du Lys until the road ends at a parking.

From the Parking (in summertime crowded) it is a short walk to the base of Cascade d’Enfer (5-10 minutes). It is also possible to make a roundtrip to the upper part of Cascade d’Enfer in approximately 1 hour. From the top you will have a beautiful view on the valley and the water of the river Enfer plunging over the edge.

Cascade d’Enfer is very suitable for a visit with children, the walk is easy and water is always challenging for children. At the base of waterfall there are several points from where you can take nice pictures of Cascade d’Enfer, but you have to try them out.

There are several other nice waterfalls nearby, for instance cascade du Coeur, just east of Cascade d’Enfer. It is only a detour of 10 minutes, and really a visit worthwhile.