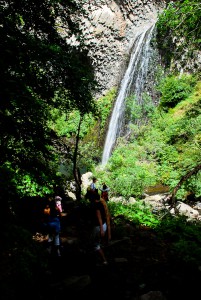 Cascade du Ray Pic is a magnificent waterfall north of Pereyres between Lachamp Raphael and Burzet in the region Rhone Alpes/Ardeche, France.

From Lachamp Raphael drive south over road D26 to Burzet. At Le Chalet du Ray Pic there are two parkings for 50 cars (gps 44.789276, 4.262991) from where an easy walk starts to cascade du Ray Pic. At the trailhead there are signs for “cascade du Ray Pic”. The walk takes approximately 20-30 minutes.

Undoubtedly Cascade du Ray Pic is one of my favorite waterfalls in France, it will certainly end in my top 3. Not because it is so spectacular but the basalt formations around the waterfall makes this a waterfall in the “outer category”.

Millions of years ago cascade du Ray Pic was an active volcano. The volcano was very active and a lot of lava  flows out of the volcano forming the surrounding landscape. These lava flows must have been among the longest lava flows in Europe with a length of twenty kilometer.

Already  in 1931, Cascade du Ray Pic and its surroundings were declared one of the most important nature reserves in the Ardèche. Cascade du Ray Pic has a total height of 60 meter but the upper part of the waterfall is not visible. The lower (visible) drop is appr. 35 meter high.

A few years ago there was a deadly accident with a dutch tourist: a huge rock fell down. Since then it is forbidden to swim in the water. In the time I was there it was allowed to swim under the waterfall of Ray Pic. I don’t know where the water comes from, but the water was sooooo cold.

From Vallon Pont d’Arc this is the perfect day trip with children. The drive will take 1h30 and is 65 km.