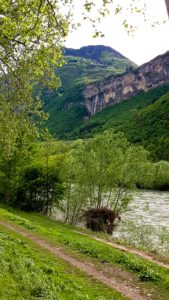 The waterfall is (at least) early in the season, springtime, visible from the west side of the city of Trento. The waterfall is quite unknown, a student I know, even didn’t know it existed.

If you want a clear view walk from the city centre to the railway station. After the tunnel you will have the first view. For a better view walk to river (gps 46.065796, 11.113988). It is also possible to park your car somewhere near the viewpoint at the river.

The waterfall Cascata di Sardagna is also visible from highway A22 west of Trento that runs paralel to the river Adige.

I’m not sure if the waterfall is visible all year around. I don’t think so. I was in Trento end of April 2019.

Sardagna is a small town west of Trento and lies on plateau at an altitude of 600 meters. There are two cabin cables going to Sardagna which quit a history. I think you will have also a good view on Cascata di Sardagna in the cable car.