Gorzifossen is an unknown but amazing beautiful waterfall at the end of the Kåfjorddalen (near Ankerlia), Troms, Norway.

Gorzifossen is an unofficial name that repeatedly comes back on the Internet. When visiting the waterfall I saw an article hanging on the wall of our campsite where the waterfalls was called Storfossen.
Neither on maps or on signs I can discover a name of the waterfall, so I just keep using the name Gorzifossen. 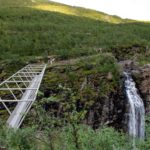 Gorzifossen is situated 15 kilometer southeast of Birtavarre, at the end of the Kåfjorddalen. Just follow the signs for Gorsebrua from Birtavarre: drive as far as possible into the Kåfjorddalen. At the end the road becomes a dust road and goes steep up. You first see a big parking at the right side of the road but drive further to a second parking, after you crossed a bridge. Park the car here at a sign Gorsebrua (gps 69.4151469, 20.9828445).

At the parking you see a path going south to the Gorsa bridge (Gorsebrua). The walk is easy and takes appr. 25 minutes (1,9 kilometer). Only at the last part you have to descend 50 meter to the Gorsa bridge. There are two tables where you can rest or take a picnic. It’s only possible to reach Gorsabrua (Gorsa bridge) on foot in summertime (from late May – begin June) until early autumn. 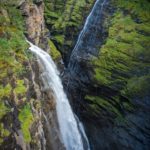 I visited Gorzifossen August 2018 and it impressed me more then I thought before. When you are standing on the bridge you look down in a deep canyon of 130 meter. The sides of the canyon are covered with moss and Gorzifossen had a quite respectable volume. Unfortunately you can’t see the “wow factor” on the pictures I made. But I assure you this waterfall is amazing in a very gorgeous setting.

I think the best time to visit Gorzifossen is June when a lot of snow is melting but it also seems that the flow of the waterfall is quite consistent.

If you are visiting Gorzifossen it is possible to Bungee jump (only in the weekend!!!). Prices are from NOK 990, but it looks really great. Falling into the deep next to a great waterfall. You have to book in advance at Lyngenfjord Bungee.

I first thought that Gorzifossen didn’t always flow with a maximum volume because there is a power plant Guolasjohka Kraftverk nearby and there are signs for fapmorusttet kraftstasjon. But I think the old power plant isn’t active anymore.

Back in Birtavarre you will find another amazing waterfall that can be seen from the road, called Oksfossen.

The highest and most impressive waterfall of the north is also nearby. A little bit further away, in the Reisadalen, you can find the huge Mollisfossen, the biggest waterfall in the north and one of the best waterfalls to visit in Norway.