Oksfossen is an unofficial but nice waterfall at the south side of the valley in Birtavarre/Kåfjorden in the region Troms, Norway.

From the small town Birtavarre you already can see  Oksfossen in the the distance. You can take the exit to Kåfjorden to get a closer look. Near Holmenes Sami Farm there is path going to the base of Oksfossen. 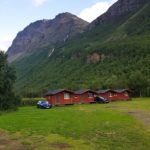 We stayed at the camp site (high north camp Birtavarre), almost next to the waterfall, when we were traveling around northern Norway chasing waterfalls. It is not the best camping you should wish but it is a nice base for activities in the region. We booked a cabin with good beds (that was nice but also more expensive) but there was no cutlery and the cooker was broke.

Back to the waterfall: in summertime a huge amount of water drops down over 400-500 meters. The river Okselva (Vuoksajohka) plunges down over more then 6 steps.

Oksfossen is fed by melted snow and ice form the Isfjellet (1.375 m) with some small glaciers an several lakes.

In the area of Birtavarre are several other nice waterfalls. My favorite is Gorzifossen that can be found at the Gorsa bridge (Lyngenfjorde Bungee in Google maps), further into the valley (15 kilometer) following road Fv333.

A little bit further away, in the Reisadalen, you can find the huge Mollisfossen, the biggest waterfall in the north and one of the best waterfalls to visit in Norway.