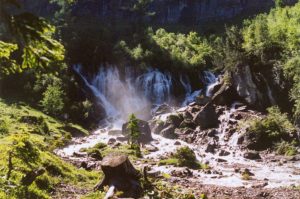 From Lenk drive south to restaurant Simmenfalle. The parking (gps 46.426338, 7.476171) is officially only for customers but you can park your car somewhere nearby where possible. From the restaurant just follow the river Simme, along the Simmenfälle, upstream. After appr. 30-40 minutes you will see restaurant Siebenbrunnen with the waterfall at the mountainside.

Siebenbrunnen is a karstic waterfall: The water flows directly out of the mountain over a wide of 30 meter.