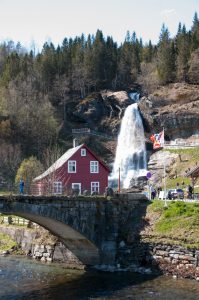 Steinsdalsfossen (sometime named as Øvsthusfossen) is one of the most popular waterfalls in Norway, lying along the road from Norheimsund to Bergen, road number 7.

Steinsdalsfossen is easy to find, driving on road 7, one kilometer west of the center of Norheimsund. You can’t miss Steinsdalsfossen and it is also visible from the roadside. There is a big parking in front of Steinsdalsfossen. From the parking it is a 2 minute walk to the waterfall.

Because it is frequently visited by tourists the surrounding of the waterfall had transformed into something unnatural with a concrete path and viewpoints with platforms. Nice for tourists but I am an upholder of keeping waterfalls in their natural environment. Nevertheless Steinsdalsfossen is still worthwhile to visit and is one of the most beautiful waterfalls when staying near Bergen.

The river Fosselvi drops down 48 meters (measured with a laser height meter) and is special because you can walk behind the water veil. The flood of the river is quite consistent and is being fed by water from a serie of lakes from which Myklavatnet (alt. 860 m) is the biggest.

I liked my visits (twice) to Steinsdalsfossen very much. Together with the Orredalsfossen and Fossen Bratte this was the highlight of my stay in Norway, May 2015 when many waterfalls had hardly any water in the river because of the low temperatures.

Best time to visit the Steinsdalsfossen is early summertime, when temperatures are rising and melted snow finds its way down the mountains. The first picture (at the right) was taken in June 2013, when the river had more volume then the rest of the pictures, These were taken May 3th in 2015. Nevertheless I really enjoyed this waterfall.

Steinsdalfossen was already popular a hundred years ago, at the time of the emperor of Germany, Wilhelm II. He visited Steinsdalsfossen every year, until world war II began. Actually the waterfall is not that old: at the 17th century the river flowed west of Steinsdalsfossen. In 1699 “Øvsthus farm suffered great damage when the river flooded its banks”. The old river channel was closed off, perhaps as a result of great amounts of snow or an avalanche, and the water ran instead off the cliff.

Often Steinsdalsfossen is written without the first “s”: Steindalsfossen but this is incorrect. The name is derived from the name of the valley Steinsdalen.

Note: Steinsdalsfossen is lying along a Toll point (bompenger) on road Fv7.