Vallestadfossen is hard to miss when driving on road Fv13 coming from Vik/Viksdalen. At the right side of the road you will see a wide powerful waterfall cascading down over 35 meter. It is more an huge rapid then a waterfall, but can be very powerful. 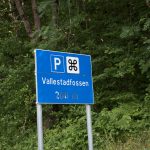 I was not sitisfied with this view and I too the path down to Viksdalen camping. Here you can park the car somewhere and explore the waterfall extensively.

Early summer until midsummer there is lot of melted snow and ice coming down from the Gaular mountains. The valley is surrounded with a mountain plateau with heights of 1.200-1.400 meter and two small glacier Jostefonni and Grovabreen. Most of the year the river Gaula has a significant volume. In 1995 the volume reached a devastating amount of 1.318m3/sec. In the beginning of June the river Gaula has an average volume of 300 m3/sec which decreases to 100 m3/sec in July, which is still a lot of water. With warm and sunny weather the average volume can double! 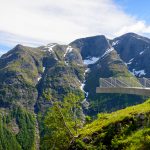 After I visited Kvinnefossen in 2017 I continued my way to the region of Førde on my way to Huldefossen. I recommend taking the mountainroad in the Barddalen. Here you will great views and the road ascends quickly over 500 meter taking many hairpin curves. Almost up there is an art piece of steel and glass looking to the valley and one to the mountains. The view is breathtaking and a stop with the car is a must. 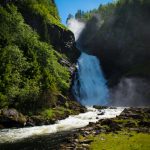