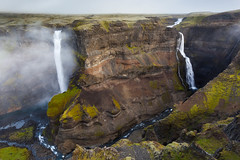 Granni is a waterfall in the river Fossá next to Háifoss, the second highest waterfall of Iceland, after Glymur, with a single drop of 122 meters. The waterfall is situated in the South of Iceland not far from the Volcano Hekla. From the view point you can see both impressive waterfalls Háifoss and Granni.

There are two possibilities to reach Háifoss/Granni:
1. Walk from the historic farm Stöng.There is a walking trail at Stöng farm which leads along the river Fossá toHáifoss. This walk takes about 5 hours.
2. Drive further up to Haifoss (road 327>332) over a dust and rocky road. I am not sure if the dust road is also suitable for 2WD. From a parking lot it is less then 30 minutes to see Háifoss.
In 2011 we were in Iceland and wanted to visit Háifoss with a 2WD. We took a terrible side road from road 32, but we turned back half the way because of the possible damage to the car. Later on I discovered that it is better to drive to the farm Stöng (road 32>327) and drive up from there. Unfortunately we never got there.

Nearby you can find an astonishing valley Gjáin. Gjáin is a stunning ravine with lush vegetation in Þjórsárdalur in the South of Iceland, not far from the Hjalparfoss. Gjáin means rift and is a valley with several breath taking waterfalls, although these aren’t vert high. The most famous and most photogenic one is called Gjáinfoss or Gjárfoss but mostly just named Gjáin. Gjáin was a filming location in Game of Thrones.

Stöng is a reconstructed viking farm. It is a historically accurate reconstruction of the three buildings, including a longhouse, which stood 7 km to the north at Stöng; the farm is believed to have been buried under volcanic ash in 1104 following the eruption of the volcano Hekla.

The reconstruction was built in 1974 as a part of the national celebrations of the 1100th anniversary of the settlement of Iceland in 874.