This can’t be a surprise when you consider that the Norwegian scenery forms an ideal base for high and powerful waterfalls. The Norwegian countryside has a lot of mountains, plateaus, glaciers, high volume of rainfall and many fjords with (relatively) high and steep mountain areas. 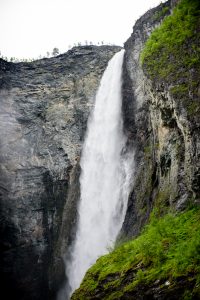 The Norwegian word for waterfall is “fossen” or “foss” as in several other Scandinavian languages. At the moment I have approximately 350 waterfalls registered in Norway, the highest number in Europe. It is almost impossible to place all waterfalls in the database because often, small rapids are named waterfall and even more waterfalls that are sure to be considered as a waterfall but have no name. The next few years I will undoubtedly discover dozens of waterfalls in Norway and I have planned several trips to Norway. I love Norway and its waterfalls, although it one of the most expensive countries in Europe!

When you want to chase waterfalls in Norway, the best period to got to Norway is around June when temperatures are rising and there is still a lot of snow in the mountains. If want to visit the most southern part of Norway, with a hilly landscape, you can go to Norway a little bit earlier. For regions near glaciers, July is usually the ideal time for chasing waterfalls. If going north, July or August is the ideal period. Of course there are always exceptions, but it is a nice reference.

Norway is a very large, diverse and multifaceted country with a surprisingly viewpoint around every corner. From the north to the south Norway is almost 1.800 kilometers long, but the narrowest part of Norway is just 6 kilometers wide (Tysfjord). Don’t think you can explore Norway in a short time. There are hardly any highways and most roads are 80 km speed roads. Also there are many fjords that have to be crossed by ferry. Not a problem, but this takes time. The most popular ferry is the one from Hellesylt to Geiranger that leads through the gorgeous Geirangerfjord, which is on the world heritage list of Unesco. Often the ferry between Gudvangen and Flåm is also named as one of the best boat trips. 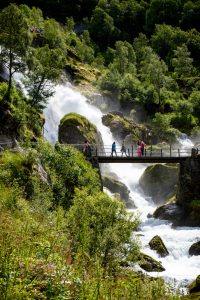 Norway is a country with a great diversity of landscapes and climates, with small areas with microclimates. In the far south the countryside exists of hilly landscapes, getting rougher going more north. Here you enter the western part of Norway (the fjord region) with its numerous waterfalls. Just north of Bergen you enter an area where the mountains are higher, where the largest glacier of Norway is located. The Jostedalsbreen with (currently) an area of 474 km² is the biggest glacier on the mainland. Slightly to the east you enter the region with Norway’s highest mountains. The Galdhøpiggen with a height of 2.469 meters is located in Jotunheimen Nasjonalpark is the highest mountain in Norway. Further north the landscape becomes more hilly and much colder. Still there are several extremely beautiful waterfalls to be found in the Reisadalen (on the border crossing of Sweden-Finland-Norway).

The majority and most beautiful waterfalls in Norway (there are always exceptions) can be found in the southern provinces Hordaland, Sogn og Fjordane and More og Romsdal which are my favorite regions because there is a high concentration of waterfalls per km2. Moreover, here you will find the highest and mightiest waterfalls of Norway. 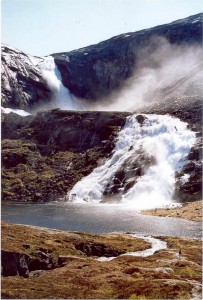 Near Kinsarvik you will find, within 50 kilometers, 15 amazing waterfalls which are part of my top 30 most beautiful waterfalls in Norway. The absolute highlight of Norway is a walk near Kinsarvik, into the Husedalen. The walk from the end to the start of the Husedalen leads along four mighty waterfalls (Tveitafossen–Nyastølsfossen–Nykkjesøyfossen–Søtefossen), the most beautiful walk I ever made. I should also mention that the weather was perfect, which gives a much positive experience.

So I can actually still continue for a while with beautiful experiences and beautiful waterfalls walks to be made in Norway. There is a reason why Norway is called the land of waterfalls. Not only in Europe but it also one of the best waterfall countries in the world. Please send an email if you want advise or suggestions.

Biggest waterfalls by volume in Norway 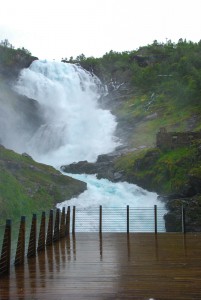 You can create as many lists as you want, but this one should be the easiest and most objective one: most powerful waterfalls in Norway by volume. There are several agencies that measure how much water is flowing through a river. But Norwegian is still difficult to read for me (some words are similar to English and Dutch). This is on my task list next year. There are several very powerful waterfalls I drove by like the Kjosfossen (Flåm), of cause the Langfossen, Låtefossen or maybe the Sötefossen.

Generally the river Glomma is one of the most powerful rivers (average 709 m3/sec) in Norway. Although there is a (sort of) waterfall called Sarpsfossen in the river, I don’t count in this one in my list.

The river Gaula is also a very powerful river (average 300 m3/sec) with several waterfalls in it. Vallestadfossen is one of them located in upstream part of the river. One maybe also very powerful, in a nearby river, is the gorgeous Huldefossen near Moskog.

Another powerful river with a high average flow rate is the Målselva (average 171 m3/sec) with the Målselvfossen in it.

The last river I will mention is the river Vefsna (average 207 m3/sec) with the nice waterfall Laksforsen in it. 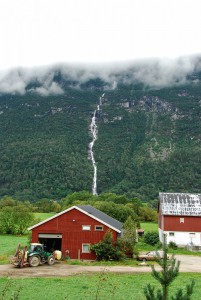 But Okay, according to my figures and research the Rangåafossen near Flatmark is the highest waterfall with a total drop of 920 meters (exceptional because I am the only one with this waterfall in my list). Unfortunately the waterfall is regulated and not always visible.

The second highest waterfall in Norway is more difficult to determine because heights aren’t always official measured or part of a discussion, like the height of the Ramnefjellfossen, most of the time a height of 818 meter is mentioned.

Most beautiful waterfalls in Norway 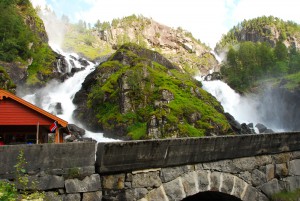 The most beautiful waterfall is even more subjective and has a high personal experience. I know myself that I think a waterfall is beautiful as the weather was good and I really enjoyed the walk and I love the nature. Perhaps I drove past a waterfall when there had just been an awful lot of rainfall. Then a waterfall is much nicer than in a dry period.

Nevertheless I made a top 5 of most beautiful waterfalls of Norway, based on my own experience: